Champions League match between Paris Saint-Germain and Borussia Dortmund will be played without fans in attendance on Wednesday.

With spread of coronavirus taking it’s toll on many football leagues around the world, it was feared that the match will be postponed.

But with announcement of Paris police that the match will take place but no fans will be allowed in the stadium.

The French government also prohibited the gathering of more than 1000 people.

PSG also announced that it will fully reimburse all supporters who bought their tickets for the match against Dortmund, at the Parc.

PSG now might find it more difficult to turnaround their 2-1 deficit.

Ronaldinho is behind bars in Paraguay in a prison that hosts a futsal championship. 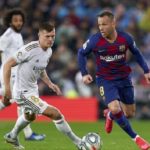 Arthur and Sergi Roberto might feature for Barcelona against Napoli