Vinicius Junior has paid tribute to Karim Benzema for taking him under his wing when he first made the move to Real Madrid.

Los Blancos paid a reported €45 million for the Brazilian teenager in May 2017. The youngster joined from Flamengo the following year when he turned 18.

Vinicius has already played 72 times for the club since his move. However, he has struggled for consistency despite often catching the eye with his skillful style of play.

He has started the 2020-21 campaign in impressive fashion, scoring the winner in the 1-0 victory over Real Valladolid. He also got the opener in a 2-0 win at Levante last weekend.

That was the first time he has scored in consecutive La Liga matches. There is hope that the Brazilian is starting to gel in attack alongside Karim Benzema.

So far, Vinicius holds Benzema in high regard for the role he has played in his Madrid career to date.

“Karim is an idol, it is an honour to play with him,” Vinicius told RMTV. “We always talk about what I can improve, also how he can help me.

“When I arrived, he did not know me but he still started to help me. He helped, and now he continues to do so, he tells me to be calm and helps me make the best decisions.

“It is a dream to play with Karim and with all the players who are here. I take advantage of all the moments with everyone and I listen a lot because they help.

“They know that I listen a lot and I learn with them.”

Many still say Vinicius lacks a proper goal instinct in the final third but the player says he has matured since joining Real Madrid.

“I arrived at the age of 18 and having played only in Brazil, so everything was new for me,” he added.

“I was learning and I continue to do so to help Madrid. Now I am another player. The people at Madrid help me so that I can help now and in the future.

“I’m very good, very happy with my moment, but also with the team. We have to continue like this, improving the things that we are not doing in this different season because we only had a friendly and it is difficult to start.” 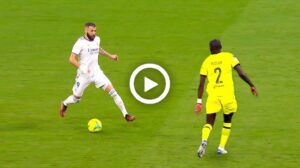