Salah choosing to stay upfront and not track back almost all the time is reminding Wayne Rooney of Cristiano Ronaldo at Manchester United.

Rooney and Ronaldo grew a formidable partnership at Old Trafford during their five years together at the club.

Ronaldo was one of the most important pieces in attack for the Red Devils at the time and many of his former teammates that played alongside him have admitted Ferguson had to change his tactics to suit the Portuguese.

Ronaldo was allowed the freedom to roam upfront in attack for United and was also afforded the luxury of not tracking back. The positive to this is that it made him even more effective for counter attacks. Salah is already showing a similar style of play and Wayne Rooney cannot help but point it out.

He said in the Times: “Mo Salah is starting to do what Ronaldo did for Manchester United.”

“In terms of just being there and not really getting back to defend but always being a threat so that if you’re a defender or midfielder playing against him.”

“You’re terrified of him on the counterattack.”

Salah has been consistently prolific for Liverpool since he made his debut, scoring 91 times in 144 total appearances for the club. 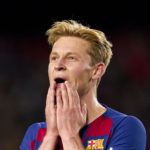 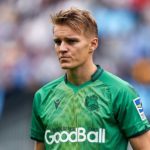 Odegaard will stay at Real Sociedad for another year