Neymar left Barcelona for a world record 222 million Euros back in 2017.

It is a decision that both the player and the club have ultimately regretted. With Barcelona failing to replace the forward, and the player not reaching the dizzying heights he expected at PSG.

The rumors of a return to Catalonia have been rife for over a year now.

There has also been plenty of talks involving potential other suitors too.

But a move away from Paris now appears to be further away than ever given the financial plight facing footballing in the aftermath of COVID-19.

The player himself may be facing up to that reality as he recently commented on his commitment to PSG.

However, former Barcelona player Sylvinho insists that Neymar is in control of his own future.


Speaking to Cadena SER he believes no destination or club can be ruled out.

“Who can say that he will not return to La Liga or switch to another team.”

“The only one who can do anything is him.”

“The individual quality of the player is… mamma mia! He’s a great player.”

Adam Traore is the “Fastest” guy in football right now 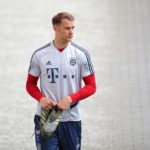