Paris Saint-Germain’s Neymar was identified as one of the seven players of the club to have contracted the deadly coronavirus.

Kylian Mbappe, Angel Di Maria, Mauro Icardi, Leandro Paredes, Keylor Navas, and Marquinhos, along with Neymar, were all forced to observe a period of self-isolation.

Bar Mbappe, each of the players probably contracted the virus while away on holidays following the 1-0 Champions League finals defeat at the hands of Bayern Munich.

Neymar has now completed his quarantine period. He announced the news via a Twitter post that read: “I went back to training, super happy #CORONAOUT”

The absence of the aforementioned players proved to be, as it was expected, disastrous for PSG as they failed to secure a single point in their 2020/21 Ligue 1 season opener.

Thomas Tuchel had to include several youngsters in his starting XI on Thursday night, and Lens managed to scrape past them with a 1-0 win.

Neymar’s return will be a sigh of relief for Tuchel as he is now available to play PSG’s next crucial league match against Marseille on the weekend. 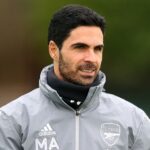