Paris Saint-Germain superstar Kylian Mbappe has constantly been linked with a move to Real Madrid throughout this season.

The departure of Cristiano Ronaldo to Juventus in 2018 left a huge gap in the Real Madrid attack. Neither Karim Benzema nor Gareth Bale has been able to truly step up and Los Blancos have struggled in the goalscoring department ever since.

Hence, according to rumors, the thirteen times Champions League winners identify Mbappe, whose astonishing tally of 18 goals and 7 assists from 20 games won him this season’s Ligue 1 Golden Boot, as the solution to their attacking woes.

Sporting director Leonardo, however, recently declared that PSG do not intend to part ways with their star player.

Luka Modric admits the 21-year old has the capabilities to reach the top of the game but can only truly realize his full potential in a league which provides him with more challenge.

“But I think that to make the leap in quality he needs to go to a championship in which his team does not win so easily.” 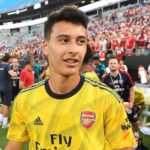 Atletico must win every match from now on says Diego Simeone