Liverpool were denied a dramatic winner in an action-packed Merseyside derby with Everton as the intervention of VAR saw a stoppage-time effort from Jordan Henderson ruled out.

Sadio Mane recorded the Reds’ fastest Premier League goal in a Merseyside derby, only to see that effort cancelled out by Michael Keane. Mohamed Salah’s 100th goal for the club had Liverpool back in front, but the Toffees hit back again through the in-form Dominic Calvert-Lewin.

The reigning champions thought they had snatched all three points in the closing stages, with club captain Henderson turning a close-range effort past a despairing Jordan Pickford, who got his hands to the effort but could not keep it out.

Ecstasy turned to agony as according to those making VAR calls at Stockley Park, Sadio Mane had strayed offside by the narrowest of margins. 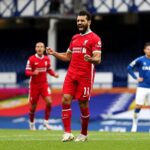 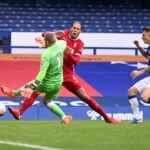