Liverpool defender Joel Matip recalls how he had to take a drug test alongside Lionel Messi after his side knocked Barcelona out in the Champions League.

Matip has revealed how he was to take a routine drug test after the game and was joined by the Barcelona captain.

Speaking to 11Freunde, Matip gave his account of events:

“I didn’t care about anything, singing with the fans made me float,” he said. “And when I came into the small room, there was a pretty depressed guy- Lionel Messi.

“You know each other but only from the pitch, you don’t sit around with it every day in a small room like at a coffee party.”

“Everyone is celebrating and I’m sitting in a cubicle with Messi!”

After his test Matip was allowed to join the rest of team in the celebrations, and described it as one of the highlights of his career so far.

“After the game, we lined up arm in arm in front of the Kop together with the fans,” he added.

Joel Matip has revealed how a drug test with Lionel Messi made him miss out on the celebrations after beating Barcelona last season.

“Singing with the fans made me float. When I came into the small room, there was a pretty depressed guy – Lionel Messi.”https://t.co/RoqeVWmDgW

Sadio Mane has the qualities Zidane will want at Madrid 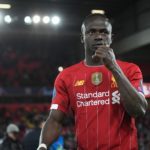