As expected, Paris Saint Germain were able to push over their rivals with ease. They added the Coupe de France to their Ligue 1 honors as they prepare for Champions League glory.

St Etienne had defeated the exciting Rennes in their buildup to the match, and many a fan would have hoped they did not make it. Such was the rugged display by the French minnows.

PSG started the match brightly, and dominated earlier exchanges. They would register their superiority before the quarter hour mark.

Kylian Mbappe broke through from the right side but his shot was parried by goalkeeper Jessy Moulin. The ball fell in the advancing Neymar’s path, who did not miss from 9-yards away.

The match continued in similar vein as St Etienne were consigned to their own half. Mbappe continue to threaten from the right flank. It would lead to a moment of madness from Etienne captain by the half hour mark.

Unable to contain the French superstar, Loic Perrin lunged on the advancing Mbappe. The 2018 World Cup winner was in obvious pain and did not get up from the turf.

Referee, Amaury Delerue showed Perrin the red card but the damage to the fixture had been done. Mbappe was promptly substituted as Etienne played with 10 men.

PSG continued to threaten but the low block from Claude Puel’s men did not allow them to add to their tally. In the end, PSG would turn out winners but the fixture left them in a state they are all too familiar with.

The Parisians head into their Champions League fixtures without the availability of their star performers. It has been Neymar who missed previous encounters, but it is Mbappe who will be getting treatment this time around.

Jordan Henderson voted as FWA Footballer of the Year 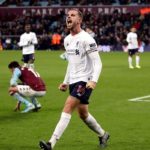 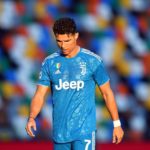 Cristiano Ronaldo is the current top scorer of 2020