Cristiano Ronaldo even after turning 35 has been in amazing form, scoring 21 goals in as many Serie A games.

He has continued to be Juventus’s talisman, and has helped Juve on all three fronts.

The Old lady are top of the table after Matchday 26, are in the Semi-final of Coppa Italia and are in the Round of 16 in Champions League. Ronaldo, recently played his 1000th official game for Club and Country.

And Andrea Pirlo is pretty happy with Ronaldo’s arrival to Juve and believes the 35-year old will play a huge part in Juve’s Champions League ambitions.

Speaking to Sky Sports Italia, Pirlo said: “If I had played with Cristiano Ronaldo on the same team, I would have been the best assist provider of all time.

“I am happy that a great champion has joined Juve.

Achraf Hakimi will be happy to return to Real Madrid 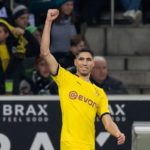 Mourinho hopes for something special against RB Leipzig