It appears the majority of Kylian Mbappe’s iconic celebrations are inspired by his idol Cristiano Ronaldo.

As a youngster, the French forward was obsessed about following in the footsteps of Ronaldo.

Mbappe’s father once said his son used to “spend hours” watching videos of him on the internet.

Mbappe has also spoken about how influential the five-time Ballon d’Or winner was on his career during an interview with Spanish publication MARCA,

“He is a hero from my childhood and it was amazing to meet him when I visited Valdebebas,” he said.

“But I am a competitor and a person who is very competitive and all I want to do is win, win, win. So it doesn’t really matter who is in front of us, we want to win.

“I admired him when I was younger, but that ended. Now I go to the Bernabeu to play and to win.

So it’s no surprise that the 21-year-old has adopted a number of traits from Ronaldo, including a selection of celebrations, as pointed out by Twitter user TheFergusonCode.

He posted several pictures in the post with the caption: “How am I understanding these references just now??

Cristiano Ronaldo is just 14 Goals away from breaking this record 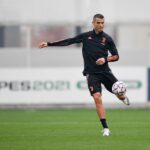 Cristiano Ronaldo Training Pictures ahead of the UCL clash against Ferencvaros