Since its inception on March 6, 1902, as Madrid Football Club, the club has worn a white home kit. The term “real” means “royal” in Spanish, and it was bestowed on the club by King Alfonso XIII in 1920, along with the royal crown in the club’s emblem.

Since 1947, the team has played its home games in the 81,044-seat Santiago Bernabéu Stadium in central Madrid. Unlike most European sporting organisations, Real Madrid’s members (socios) have always owned and operated the club.

The club has one of the largest fan bases in the world. Real Madrid, along with Athletic Bilbao and Barcelona, is one of three founding members of La Liga who have never been relegated from the top flight since its inception in 1929.

El Clásico with Barcelona and El Derbi Madrileo with Atlético Madrid are two of the club’s long-standing rivalries.

On May 11, 2010, the IFFHS named the club Best European Club of the 20th Century. In June 2017, the team became the first club in history to win three consecutive Champions League titles, and in May 2018, they made it four in a row and four in five seasons, extending their lead atop the UEFA club rankings.

Video: The Last Game of Cristiano Ronaldo in Real Madrid 😢 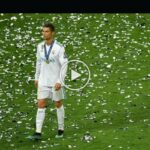 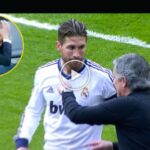