Cristiano Ronaldo is arguably the best player to play in the Champions League and 17 years ago he made his debut.

On October 1 in the 2003/02 season, during his time at Manchester United, Cristiano Ronaldo made his first appearance in the Champions League.

The then-18-year old started and played full 90 minutes of Man United’s clash against Stuttgart in the group stages of the competition.

Cristiano Ronaldo made his Champions League debut. He is the all time UCL top scorer with 128 goals and five UCL titles.

While the match ended in a defeat to the Red Devils, the Portuguese managed to make some impact as he earned a penalty, converted by Ruud van Nistelrooy, which led to his side’s only goal in the 2-1 loss.

Ronaldo has since won five Champions League titles in total – one with Man United and four with Real Madrid.

CR7 also boasts a huge number of records in the competition some of which are most goals (128), most goals scored in a single season (17), first to reach the 100-goal mark, only player to have scored in three finals, and joint-most final appearances (6). 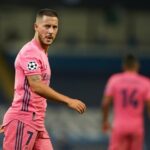 Hazard plans to be fit for El Clasico