Rashford has been a lifelong United fan. He is living the ultimate dream of playing for his boyhood club.

However, he was asked on a Instagram live video, if he had to pick a team of six who would be in it.

The Young England international went with players he either knew or had grown up watching and had fond memories of.

“I’m going to go with most of the players from the team that I watched when I was growing up.”

“At the back I’d probably have Rio Ferdinand.”

“In net, I’d probably have David De Gea, actually, but it was a close one between him and Edwin van der Sar.”

“No Peter Schmeichel? I never really got to watch him.”

“When I was a kid van der Sar was one of the best keepers and obviously playing with David has been great, so I have to put David in there.”

“I’m an all-out attack from there.”

“I’d have Scholesy in front of Rio Ferdinand, Ryan Giggs on the right, Cristiano Ronaldo on the left and Wayne Rooney up front.”

“I’m not putting myself in. Not yet!”

When it came to naming his top three footballers in the world though, there was only room for one United connection.

“Top three players of all time?”

“I just liked his creativeness on the pitch. He was doing things that nobody else in his generation was doing.”

Kevin De Bruyne has called for the season to be scrapped 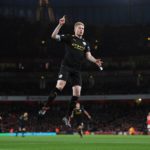 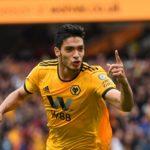