Barcelona thrashed Villarreal 4-0 at home with the two goals from Ansu Fati and Penalty from Lionel Messi.

Ansu Fati made the headlines his own with an inspiring performance against Villarreal on Sunday night. The Ronald Koeman era is off to a good start.

The Catalan giants have been faced with all sorts of problems off the pitch involving the management of players. Lionel Messi falls into that category but did not let his recent saga affect his performance.

Fati is already billed as the poster boy for Barca should Messi leave the club eventually. The young Spaniard showed glimpses of what to expect from him in that regard.

He opened the scoring 15 minutes in with an emphatic first-time finish from Jordi Alba’s cut-back. Four minutes later, he was onside to receive a neat pass from Philippe Coutinho which he buried with a neat finish.

Once again, Fati was involved after he was brought down in the area in the 35th minute. Lionel Messi, with a composed take, scored his first La Liga goal of the season from the spot.

Things got even worse for the visitors on the stroke of half-time. Torres poked Messi’s cross beyond Asenjo as the unlikely specter of Sergio Busquets lurked for a tap-in.

Barcelona saw their intensity drop after the break as Villarreal returned much better.

Two-goal hero Fati was taken off in the 70th minute and replaced with another talented teenager in Pedri.

Ansu Fati – “Playing with Messi is a dream” 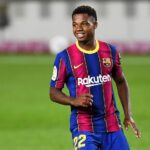 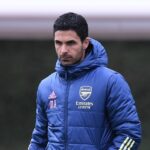