Sarri signed a three-year deal with Juventus after his contract at Chelsea was terminated by mutual consent.

The Italian won the Europa League and led Chelsea to third-place finish in the Premier League last season and is hoping for further success with Juve next term.

He is also relishing the chance to work with Ronaldo, a player he feels is a level above the players he managed at Stamford Bridge.

‘I’ve trained great players over the years, but with Ronaldo I move on to the next level, a player who is at the top of the world,’ Sarri said at his opening press conference as Juventus manager.

‘This is a lad with every record in world football and I’d like to help him set another, knowing I contributed to it.’

Sarri is confident Ronaldo can improve on the tally of 21 goals he managed in his debut league campaign with Juve last season.

‘I trained a player with the all-time Serie A record for goals in a single season,’ Sarri added. ‘I’d like to make that two. It’d be an enormous satisfaction.’ 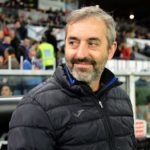