Van de Beek is one of the most wanted midfielders in Europe and it appeared that the deal between Real Madrid and Ajax was done.

Back in January, reports in Netherlands suggested Los Blancos and Ajax had already agreed a deal for the player with the only the player’s signature left to finalize the deal ahead of the summer.

But as per Marca, United are still planning to hijack the Van de Beek and are plotting to make a last-ditch offer.

Marca highlights a report from Netherland saying Los Blancos have to denounce their contract with Ajax for United to be able to have a chance at Van de Beek.

The Dutchman has grown as one of the most talented young players and is only lacking the move to a bigger club. Moves similar to the one his former teammate De Ligt took in swooping for Juventus.

Carlo Ancelotti is not happy with UK not taking coronavirus seriously 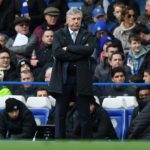