Juve have killed off Cagliari with a fine opening 45 minutes to move within a point of Serie A leaders AC Milan.

The Old Lady has endured some rocky performances so far this season, but things looked much brighter today.

The opening half was very much one-sided, and we were sorely denied the an early goal because of offside. Alvaro Morata’s arm was deemed to have been ahead of the last man in the build-up, before he set Bernadeschi through for the goal.

We weren’t phased by the decision however, as we continued to dominate, and the opening goal did come.

No surprises to find that it was Cristiano Ronaldo who broke the deadlock, to become the first man in 25 years to score for Juventus in all five of his first five league appearances in a season.

The Portuguese was given the ball inside the opposing box, and cuts back across two defenders before slotting into the far corner of the goal.

The celebrations had barely stopped before that man Ronaldo scored again. This time he showed off his amazing reflexes to hook his leg back as the ball came in behind him, to slot home.

There appears to be no stopping CR7 this term, and at half-time could boast a record of scoring eight goals in only 425 league minutes (under 54 minutes per goal)…

In the second-half we moved to control the match, but failed to get on the scoresheet, and the all-important three points was secured, although I can’t help but feel like Cristiano Ronaldo will be disappointed not to have completed his hat-trick. 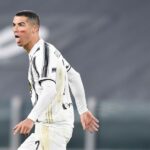