Before Cristiano Ronaldo arrived at Juventus, nobody believed he would leave his perfect world at Real Madrid.

The Portuguese star literally had everything he wanted.

He became a legend in record time, he became the club’s all-time top scorer, and he won four UEFA Champions League titles in four years.

On paper, there was no reason for him to leave the perfect setting for any other club.

But sometimes you have to make tough decisions in life.

In Ronaldo’s case, he had to make a statement against Florentino Perez.

Let’s just say he played chicken and nobody lost in the beginning. The Juventus players never imagined what was happening that summer, some of them didn’t even believe it was true.

In Juan Cuadrado’s case, he actually thought it was a joke. When he found out it was real, he was overly excited.

During an interview picked up by Football Italia, this is what Juan Cuadrado said about Ronaldo and Pirlo:

“Ronaldo is a great professional. You can only learn by working with him. He is a model for what he does in every game and every training session.

I didn’t believe he could have joined Juventus. Now I am happy he is part of the team. I used to wear the No. 7 before he arrived, but I gave it to him without any problem.

Playing is what matters. It’s better to give than to receive.

“Pirlo is doing a great job. It’s not easy to join a top club. There have been many changes, and we need to have patience. We lost some points, and that’s why we are in this position.

Now we must earn as many points as possible and try to reach a Champions League placement. The Coppa Italia Final is also crucial for us.
We hope we can win the derby. We must have no fear. We are training to get the best possible result.”

Cristiano Ronaldo’s armband auctioned for sale by a charity foundation 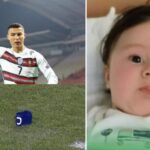