Cristiano Ronaldo spoke after the game and was positive about the result as he thought it was a point earned and he sees a bright future for Juventus with Pirlo.

Juventus weren’t in top form away to Roma for Pirlo’s second game in charge but came away with a point, courtesy of Ronaldo’s double.

The Bianconeri fell behind twice in the game through two goals from Jordan Veretout. The midfielder scored his first from a penalty before Henrikh Mkhitaryan assisted him for a second goal after Ronaldo equalized with a penalty of his own.

Adrien Rabiot’s sending off for a second bookable offense then left Juve down to 10-men in the second half.

But, like on so many other occasions, Ronaldo came to rescue by scoring a towering header from Danilo’s cross to salvage a 2-2 draw in the Italian capital.

It may not have been the perfect outcome, but the Portuguese ace was upbeat and is hopeful of another successful campaign in Turin.

“I think it is a point earned,” Cristiano told Sky Sport Italia.

“It had become a complicated situation but we got back into it, even after the red card, so by the end of the campaign this could prove to be an important point.

“We’re at the start of the season, there’s a new coach, new ideas, but I see the team working well. We’re enthusiastic and I see a bright future for us.

“What we’re seeing is that the team is happy to work with a smile.” 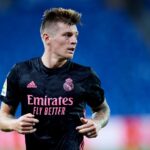