Georgina Rodriguez sparked rumors of a proposal from Cristiano Ronaldo. She put up a picture of the two together, captioning it “yesss” with a rose emoji on her Instagram profile.

This sent the social media in overdrive as speculations about the two finally settling down took center stage.

Marca has reported that the Madeiran has actually gone down on one knee and proposed to Georgina.

The two have yet to make an official statement on the topic.

Ronaldo and Georgina have been in a relationship for four years now. They have a daughter together, Alana Martina. The youngest in the family turns three in November.

Elsewhere on the pitch, Ronaldo completed a century of international goals. His 100th came from a sublime free-kick. He finished the match on 101 goals.

Barcelona have made their first offer for Eric Garcia 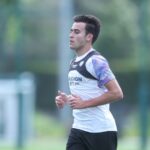 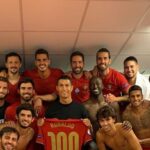