Cristiano Ronaldo has warned all Manchester United players that he would not accept the club’s present shambles.

Obviously, the five-time Ballon d’Or winner has had a lot of success in England, Spain, and Italy over his career. On February 5, the Portuguese legend will turn 37, yet he has vowed to continue fighting at the highest level.

Many would have accepted the Red Devils’ current condition, but Ronaldo is not one of them. As a result, he has asked those around him to buckle up and return United to its rightful place.

“I don’t agree that our mentality is less than being in the top three in the Premier League.” I believe that in order to develop excellent things, you must sometimes demolish a few things. So why not – a new year, a new start, and I believe Manchester United can reach the heights that the fans desire. They’ve earned it.”

“Right now, we have the ability to change things.” I’m aware of the route, but I’m not going to reveal it here since I don’t believe it’s ethical for me to do so. What I can say is that we can all do better. Manchester [United] is associated with significant events, so we must change that.”

“I don’t want to come here to finish in sixth, seventh, or fifth place. I’ve come here to compete and win. I believe we compete, but we are not yet at our peak. However, we still have a long way to go, and I feel that if we change our minds, we can do great things.” (Source: Skysports) 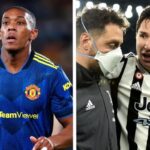