Lionel Messi, Philippe Coutinho, and Antoine Griezmann all started in the match but it was Ansu Fati who turned out to be the star of the show.

The 17-year old opened the scoring within the first 15 minutes with an exquisite strike, before doubling his side’s lead only four minutes later.

With his quick feet and trickery, the young attacker remained a thorn in the opposition defense for as long as he stayed on the pitch.

One of his runs led to Barca’s third goal as the referee awarded a penalty, which Messi easily dispatched, when Fati went down in the box after a challenge from Mario Gaspar Perez.

“Every chance I get, I try to make the most of it. When a striker scores he always wants more,” an elated Fati said after the game, as per Marca.

“What I want is to keep improving every day and to keep learning from my colleagues. They’re trying their best to help me every day.”

On sharing the same side of the pitch with a living legend of the game, he added: “Playing with Messi is a dream. I had that dream since I was a child and now I’m living it.” 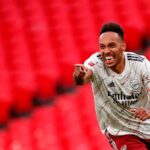 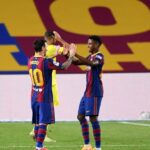