Cristiano Ronaldo is’staying’ at Juventus, according to Georgina Rodriguez.

Despite the return of Massimiliano Allegri as manager, Ronaldo’s future remains uncertain. The Juventus forward’s contract is up in a year, but there have been rumours that he could leave this summer.

According to reports, Ronaldo’s €31 million-per-year salary is a problem given the club’s financial problems as a result of the COVID-19 pandemic, paving the way for Paul Pogba and Mauro Icardi swap deals.

However, Georgina was asked if CR7 is staying or leaving Juventus while filming a Netflix docuseries in the streets of Spain.

So there you have it; Ronaldo appears to be set to stay with Juventus for at least another season.

As things stand, the 36-year-old will be a free agent in 2022 and will be able to join any club he wants. 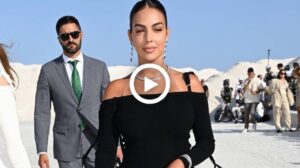